If I were to say, “Long before the terrorists on 911 hijacked those planes their beliefs hijacked their minds,” few would disagree.
But if I then said, “We are all hijacked by our beliefs,” you would think, “Not me I’m smarter than that.”
We see the hijacking in others but not ourselves. There are several reasons for this myopia. Pre-existing beliefs, a misunderstanding of human behavior and even our own senses can deceive us. Are you in a cult or brainwashed? How would you know if it felt completely normal? Ask any cult member if they are in a cult and they will vehemently deny it.
Some of us see climate change deniers, birthers and 911 Truthers and think they must be stupid or crazy. Something must be wrong with their brains! We assume it is a hardware problem – the person or their brain and cannot see that it is a software problem – their beliefs.
If beliefs are the real issue can an understanding of beliefs solve our problems? What exactly is a belief? How do they get into our heads? And why are some of the most irrational beliefs so hard to remove?
When I say belief I am actually referring to a “meme.” You know them as cat videos and images with witty captions that go “viral.” 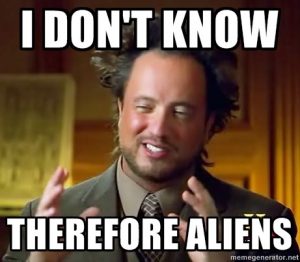 I am referring to the original meaning intended by Richard Dawkins in his book The Selfish Gene.

An idea, belief or thought pattern that replicates via non-genetic means; a parasitic code or virus of the mind.

Let us distinguish a meme from an idea or belief. It’s useful to think of one leading to the other in stages.
If I were to say, “I have an idea, go jump off that bridge,” you would not think that is a very good idea so you don’t.
But if I said, “God wants you to jump off that bridge to prove your faith,” you still wouldn’t but is there any doubt that under the right circumstances I could get someone to jump?
You know the idea has been accepted and has become a belief the moment they jump. If that same person can convince others to join them in jumping the belief has become a meme.
From the example above you should note that the truth of the meme does not matter and the host is expendable. The only thing that matters is that the meme survives and spreads as far and wide as possible.

I will use the word belief more often than meme but it is important to know that we are talking about a replicator that may or may not have your best interest in mind. If it had a mind which it does not. It is a mindless replicator doing what it has evolved to do – replicate.
The reason it is so hard for people to change their mind is because once a belief infects a mind it has many tricks to stay there and if you think that sounds weird, that is one of the tricks!
Your current beliefs will try to fight any new ideas that threaten them but there is no conscience intention it is simply the work of mindless co-evolution.
Our genes and memes have co-evolve mostly for mutual benefit but not always. When a suicide bomber takes himself out of the gene pool the meme benefits at the expense of the individual.

How does the meme benefit?

You can see that from the memes point of view the loss of a few host individuals is well worth the cost. Memes trump genes.
On the positive side if it were not for memes there would be no language, culture, science or big brains. The trick is to know what to believe and what not to believe. The simple answer is to always require evidence for what you believe but of course it is never that simple.

Assume you are hijacked

If we assume we are hijacked by beliefs we can challenge our current beliefs and be more vigilant about what we choose to believe in the future. We will demand evidence before believing. We will develop critical thinking skills to evaluate arguments. In short we can inoculate ourselves against con artists, fake news and propaganda.

This also helps us to change our perspective towards other people. What appears to be irrational or stupid behavior makes sense once you understand the belief system behind that behavior. Do not blame the person blame their worldview. Separate the person from their beliefs and expose the irrational nature of the belief not the person.

Realizing that beliefs are parasitic replicators that have evolved ways of controlling us is our first defense. Knowing they use our own brain chemicals to keep them in place and help them to spread keeps us on alert. Being aware that people have a hard time changing their minds because it feels so bad to do so makes us more tolerant.

We all have a moral obligation to make sure that our beliefs are aligned with reality. If we do not there is the real possibility of repeating the atrocities of the past for the benefit of false beliefs.

With this new understanding of human behavior we can now answer questions and solve problems that were previously insoluble. So let’s get to it.